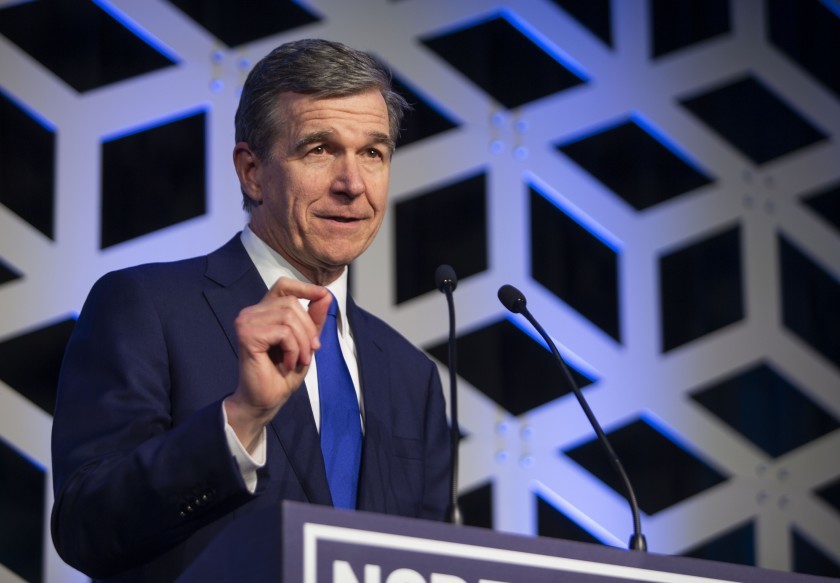 Gov. Roy Cooper’s private travels have critics saying it is a public issue.

Cooper, a Democrat seeking a second term this year, attended a fundraising breakfast in Tampa, Fla., on Thursday, March 5. There was no mention of it on his official calendar, which said he was “holding meetings and conducting other business” during the day.

That “other business” included the trip to Tampa, where he was featured at what was billed as a “Breakfast with Governor Roy Cooper.” It was promoted on ActBlue.com, a Democratic fundraising website.

The breakfast — with ticket prices starting at $500 — was held at the Oxford Exchange restaurant, which took the name from “the historic clubs, libraries and shops of London, whose charm and history seem to spark spontaneous social interaction,” it states on the restaurant website.

Cooper’s trip to Tampa was tracked by the Republican Governors’ Association. A person recorded the governor and two other people entering the restaurant.

When the tracker asked the governor if he was hiding the trip from the people of North Carolina, an unsmiling woman stood in front of his recording device as the governor climbed steps.

“Governor Cooper is so desperate to keep his out-of-state political activities a secret from the people of North Carolina that he is once again resorting to deceptive and dishonest tactics to cover his tracks,” RGA Communications Director Amelia Chassé Alcivar said in a release. “The governor’s repeated attempts to conceal where he is and what he is doing beg the question — what is Roy Cooper hiding? North Carolina voters deserve to know.”

Cooper will face Lt. Gov. Dan Forest, a Republican, in the Tuesday, Nov. 3, general election. North Carolina elects its two top officials in separate elections, which can mean they are members of different parties, as is the case now. This is the third time in state history it has happened; 20 states elect their governor and lieutenant governor in separate elections.

Brooks Fuller, the director of the North Carolina Open Government Coalition (NCOGC) and Sunshine Center, said the public is entitled to know at least some information when a government official travels.

“The public records law is all about opening up records of government conduct for examination by the public. It’s essential for elected leaders to disclose details related to travel for public business, but not their campaign stops or purely political activity,” Fuller told Old North News. “When the elected official is a candidate for office traveling for political purposes, I think best practice is to disclose details sufficient for the public to have a sense of how much of the official’s time is spent on public business versus political activities. However, further details are not required under the law.”

In 2019, he twice traveled to New York City for political fundraisers, but neither his office or the North Carolina Highway Patrol would release records of the trips on Jan. 31 and June 20. After numerous media reports, the patrol released seven pages.

Fuller, who also is a lawyer and instructor at Elon University’s School of Communications, said he draws a distinction between official duties and political activity.

“Public servants should disclose all details related to travel squarely related to conducting public business, whether that’s in-state or out-of-state,” he said. “When the travel is related to campaign activity, I think it falls outside the preamble and spirit of the public records law and our law does not envision requiring records of that campaign business to be disclosed.”

Fuller said he wants to strengthen access to public documents.

“At this point in time, I don’t believe that mandating disclosure of campaign-related travel is as important as rolling back some problematic exemptions in the public records law,” he said.

Want to get notified whenever we write about North Carolina Division of Elections ?

Sign-up Next time we write about North Carolina Division of Elections, we'll email you a link to the story. You may edit your settings or unsubscribe at any time.